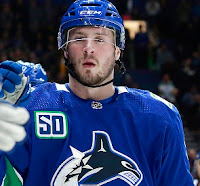 As I've tried to make clear on this blog and on The Hockey Show, the NHL is a business that has very little interest in the humanity of the sport. The decisions that are made by those who are tasked to run the NHL often seem to forget that there are people who keep them in business, and one of those groups of people are the players. While the NHL and the NHLPA have a Collective Bargaining Agreement to which both adhere, COVID-19 is not something that was ever imagined for the legalese contained within that document. With the NHL pushing for the Vancouver Canucks to return to play on Friday, one player has courageously spoken out against his employer. I am now a JT Miller fan for life.

There was always something to like about JT Miller as he's been an effective NHL player for years, but his trade to the Canucks has allowed him to fluorish offensively as he became a big piece of the Canucks' offensive scheme. He plays hard, he goes into corners and into the dirty areas of the ice, he likes to play in high-traffic areas, and he finds the back of the net often enough for him to occupy a top-six spot on the roster. Needless to say, I'm not a fan when the Jets play against him because Miller brings his best night-in and night-out.

With the Canucks in COVID-19 quarantine since March 24 when they dropped a 5-1 decision to those Jets, the NHL has decided that this Friday would be a good time for the Canucks to get back into the swing of things as the game against the Edmonton Oilers that night is on. With most of the Canucks having been affected by the virus and very of few of them having skated since late March, is the NHL insane in handing the Canucks to the likes of McDavid and Draisaitl?

One player who feels that rushing back for games this weekend is a mistake, and JT Miller spoke out about it today. And while you expect some players to lightly tread around criticism of the league and their ideas, JT Miller makes it pretty clear where he stands.

"I don't feel ready if I'm being honest. It's kind of crazy. I know everyone has a job to do but to expect our entire team to be ready to play in one practice and a pre-game skate is a bit hard to comprehend," Miller told reporters today. "To be brutally honest, we're going to need more time than this to come back and play hockey. Even the guys that didn't get it aren't ready."

There's the reality of this pandemic as it hits home for sports - guys simply aren't ready to push ahead with the business when it comes to their own health situations. Even more worrisome for the players would be the health of their families which, understandably, is a bigger priority to them.

"I hope people don't take this the wrong way, I'm a super competitive guy, but this isn't about hockey for our team," Miller made clear. "This is about the health and safety of our players, their family and their children. This isn't about making the playoffs."

I need to point out that Miller was never on the COVID-19 list that the NHL send out. He never contracted the virus, and he's the guy speaking truths to the media about how ridiculous the NHL's plan is to have the Canucks play a back-to-back against the Oilers and the Maple Leafs in Friday after being off for nearly a month with no practices. He's the guy standing up for his teammates who are suffering or are recovering from this virus. He's the guy pointing out the ridiculousness of the NHL's desire to finish a season with a team whose NHL roster cleary decimated.

I'm pretty certain that Miller won't be punished by the NHL for his comments. Even if he was, I'm certain the NHLPA would grieve that punishment. What Miller did, though, was call the whole idealism of professional sports during a pandemic into question thanks to hearing what his friends and teammates are going through while the NHL demands that the show must go on.

This isn't about making sure that players are safe - we already know that with the outbreaks seen across the NHL throughout the US. This was always about business - contracts with sponsors, contracts with broadcast rights holders, revenue generation, and minimizing losses. It's about owners and NHL management patting themselves on the back after this pandemic is over and celebrating that they "did the right thing" in keeping the games going. The players will see none of that credit despite them being the ones who were put in harm's way.

Full marks to JT Miller for calling out this plan to return on Friday. It's idiotic, it makes no sense, and it likely will end Vancouver's season as they try to play with half their roster filled by Utica Comets. Personally, I'd be totally fine if the players from the Canucks simply said, "We're done", and called it a season at this point in order to take care of themselves and their families.

That would be the humane thing to do, but the NHL isn't interested in that part of the game.

Until next time, keep your sticks on the ice!
Teebz at 22:00
Share